A lemon tree, a roller coaster, and the 5 stages

A lemon tree, a roller coaster, and the 5 stages

Posted at 22:48h in Uncategorized by Sabrina 0 Comments
0 Likes

During one of our visits with a hospice counselor soon after Sam died we were told (wisely) to be prepared for a time that would come where we would feel that the rest of the world has moved on, and left us alone in our grief. The cards and gifts would slow down or stop; the visits, the special events, the overt outpouring of love, kindness and understanding would gradually meld with the reality that “life goes on”. At least, that’s how it would feel to us, and we likely wouldn’t be ready to just “move on” at the rest of the world’s fast pace.

I think to a certain extent that has happened, although we have such good friends and a kind community that it hasn’t been nearly as bad as it could be. From cookies sent from relatives to camaraderie on long hikes, people are still showing us lots of love. And this past weekend, for example, our temple—Congregation Beth David—planted a lemon tree in Sammy’s honor. It was really nice, 12 weeks after his death, to still see people caring about Sam just as much as us. 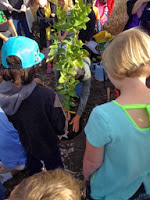 After the lemon tree planting Sabrina and I went to visit Sam’s grave. Sabrina had been back several times, but this was my first time back since the funeral. I had thought about driving out there many times in the last 12 weeks but I just couldn’t do it. Throughout this grieving process I have found that sometimes I’m an absolute rock, and to an outside observer I probably look cold or heartless because I’m “dealing with the loss of my son so well”. On the other hand, there are times when I am a complete jellyfish, nothing but raw nerves and emotions, and all of them bad (denial, anger, sadness, etc.). Surprisingly, at Sam’s grave, I held it together. I didn’t cry or lose it. And I began to think for a moment that maybe I’m at the mystical (mythical?) stage of Acceptance. 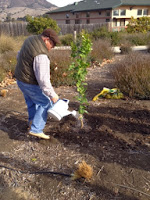 But as soon as you start to think about acceptance, you (at least I) get angry again. Angry for the unfairness of an 8-year old’s death and angry for allowing yourself to feel the “pleasure” of acceptance. Guilt for even entertaining the idea of “moving on”. Sadness when it hits you like an iron shovel (for the umpteenth time) that your little boy isn’t coming back. And so it goes. Back on the roller coaster of the 5-stages. But with each ride the nausea seems to lessen, the ride gets a little less scary, and the length of time between rides gets a little longer.