Posted at 15:21h in Uncategorized by Sabrina 0 Comments
0 Likes

Two years ago today we learned that Sam would certainly die from his cancer in days, weeks, or months.

From September 20, 2012 until May 29th, 2013 we believed that Sam would survive for years, maybe even grow to be an adult-graduate from high school, go to college, find a career, find love. The point is, we had hope. We knew cancer created all sorts of obstacles and bumps in the road. We knew there would be symptoms to be managed, treatment that would cause short-term and long-term side effects, we knew he would be sick sometimes. We never imagined he would be dead within 13 months of diagnosis.

That’s the significance of May 29th.

I wanted to express here what a difficult time of year this is.

School is wrapping up and proud parents are posting pictures of their children as they graduate from preschool, kindergarten, elementary school, middle school…and so on. There are awards ceremonies where your child is recognized for their achievements in math, their progress in reading, or their kind heart.Today our own elementary school hosted Muffins with Mom. Moms had breakfast with their students before school and are sharing photos of themselves posing with their young ones. 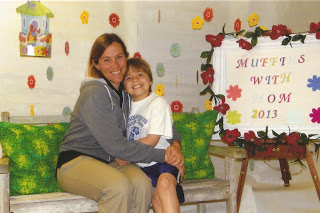 In fewer than 3 weeks would learn that Sam was dying. Dying.

Your children are precious and beautiful. I’m glad you cherish them. Don’t stop sharing, but understand that it hurts me. It’s not your fault. There’s nothing you can do. This is just the way it is. I am not OK and that’s OK. I may have unfollowed your Facebook page in order to spare myself the relentless bombardment of happy, proud parent posts, but don’t worry, we’re still friends.

Two weeks before that was Mother’s Day. Sam wasn’t here.

We went to visit Ben at school. Sam wasn’t here.

Sam’s birthday was April 2nd. He would’ve been 10, but he wasn’t here.

We could look to the future. Any time to breathe there?

July 4th-My birthday. I’m grateful to have one, to be alive, but Sam won’t be here.

Late July-We travel to Upstate NY to see family. 4 plane tickets instead of 5 because Sam won’t be here.

The experts are telling you to be extra gentle and loving with your bereaved-parent friends 2 days a year-The day of their deceased child’s birthday, and the day their child died.

I want to say-That’s a LIE.

Instead I’ll be diplomatic and say-That’s an oversimplification.

The year is full of difficult times. I anticipate the anniversary, the birthday, the holiday, the event, the trip with dread. I experience the day with sadness, tears riding right at the surface, anger stewing and coming out in bursts at all the wrong times with all the wrong people. Then afterwards I feel like I’m hungover, but I never had the good time that’s supposed come before. These rough spots with their build up and recovery never really allow for any space between them.

The year is full of these grief mines-these things that set us off. In fact, life is full of grief mines-They are everywhere. I’m not suggesting that you tiptoe around us and handle us like delicate china. Maybe just be open to the idea that even though I look OK on the surface and we’re not anywhere near Sam’s birthday or the day he died, I’m probably feeling crappy on some level.

I don’t know if there aren’t any dark days.