Posted at 22:08h in Uncategorized by Sabrina 0 Comments
0 Likes

May 29, 2013. Four years ago today we sat in Dr. Brown’s office at Children’s Hospital of Los Angeles waiting for the results of the MRI scan. Our “scanxiety”—as they call it—was high. Three weeks prior Sam’s behavior had taken a subtle, but noticeable turn for the worse. His balance was off, his focus was diminished, and there was an increased amount of “glazed eye” episodes—times he just wasn’t paying attention to us. None of these things, of course, were normal for Sam. He had been a healthy, energetic little sparkplug, and a highly attentive, focused and high-achieving learner. 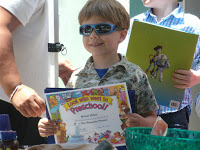 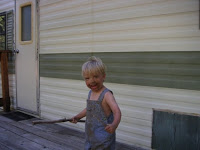 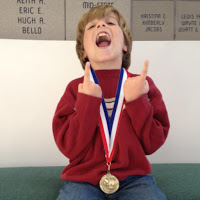 All of that came to an abrupt halt starting around May 29, 2013. Dr. Brown came into the room and sat down. I can’t recall exactly who spoke first. It might have been Sam—that would not have been out of character for him at all—but someone asked what the results of the MRI were. I do recall very clearly what Dr. Brown’s response was, and he addressed Sam directly:

“Well, Sam, everything is relative.” Then he drew a picture of how large the three—yes, there were now three—tumors growing in Sam’s head were. Each was bigger than the last time, and Sam knew it. 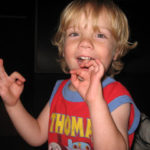 Sam: “Wow…That’s surprising…Because…I mean…We were just thinking that the tumor was going to be this big (holding out his hand and forming a tiny circle with his thumb and index finger).”

The rest of that brief meeting at CHLA is still a blur to me. We were told by someone—though I don’t think we actually comprehended the magnitude of this at the moment—that Sam would be placed on hospice. We staggered out of there and found our way down the street to the local Denny’s—Sam’s favorite restaurant and what had always been a haven for him, a respite from the poking and prodding and scans of the hospital. Although Sam ordered “the usual”—mac-n-cheese, grapes and goldfish—I think even Sam suspected that “this time was different”. Although he did not know that he was now terminal, I believe he knew things were not good.

As we’ve written about before, on the ride home, on the Ventura highway, with the vast blue ocean to our left and the looming mountains to our right, Sam lashed out, and for the first time in his battle against cancer he cried: “It just seems like everything is just…just…IMPOSSIBLE!!!” he screamed, with tears streaming from his beautiful hazel eyes. It was at once both the angriest and saddest moment of my life.

Realizing that your child will die—soon—is like getting every bit of air, every ounce of life, squeezed out of you. It was at that moment that I felt that I had absolutely failed—utterly, completely, 100% failed—as a father. I felt that I had let my little boy down by not doing enough. I didn’t really know what that “enough” was, or what I should or could have done, but I felt like a hollowed out shell of a person nonetheless.

As a parent our fundamental concern is the health and well-being of our children. It is our utmost priority. It is the foundation upon which our children’s future happiness and achievements rest. When we watch our children get hurt, even a minor injury, it hurts us. And so the pain of something like childhood cancer is indescribable. No child should ever have to suffer through it. No family should ever have to suffer alongside them. 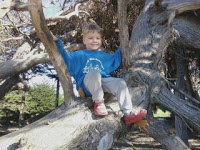 There is a solution, though. It isn’t immediate, it isn’t an elixir in a bottle or a quick fix, and it certainly isn’t easy, but a long-term solution is in the offing. It’s called research. And our take on research is that money spent on adult cancer research does not often “trickle down” to benefit children, but money spent on childhood cancer research can and does “trickle up” to benefit everyone. That’s why we do what we do at Sam’s Foundation 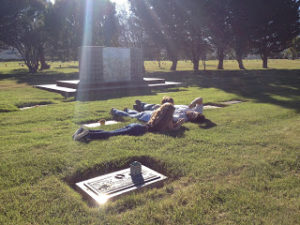 Today, as we remember and pay honor to the many selfless men and women who gave their lives in service for our country, so too do we remember the many children who have lost their lives to this terrible disease called cancer. Thank you to all of you for your continued support of Sam’s Foundation. It is making a difference.