Too close to home

Too close to home

Posted at 21:33h in Uncategorized by Sabrina 0 Comments
0 Likes

Sam continues to remain relatively stable. He needs our help to walk, and any other sort of getting around (into and out of chairs, bed, the car). He still talks a little, but very quietly and we do a lot of guessing and asking yes and no questions. I feel like in the last few days he’s not laughing as much, but he is still awake most of the day and sleeping pretty well at night.

Since we’ve made it to October I need to get busy ASAP on Halloween decorations. Sam doesn’t have a favorite holiday, but like most kids his age, he loves Halloween-the dressing up, the candy, the being out after dark, the candy…Now usually I am what like to refer to as a slacker mom. I’m the one that forgets it’s my turn to bring snack for soccer and so I go out during the first half of the game to buy it. I’m the one who forgets that it’s picture day, so my kid’s wearing his usual for the photograph. And I’m the one that puts up Halloween decorations on October 31st between the end of school and trick or treat time. In fact, one year I forgot to take pictures of the kids in their costumes, so on November 1st I had them dress up again, lit the jack o’lanterns, and snapped a photo. I can’t be slacker mom this year. There just isn’t time. 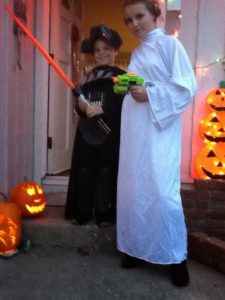 There’s no easy way to break this news: 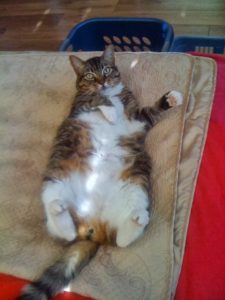 Today we lost Sir Jigs. Yes, Jigsy Kitty, AKA The Sexist Male Cat ever, is gone. And it’s all thanks to cancer. Yep, stupid, fucking cancer killed my cat.

On Saturday evening I noticed he had a little bump on his lower eyelid, and John said he hadn’t been eating as much as usual and had been coughing for a couple of days. Now Jigsy’s always been a rather hefty dude, weighing 12 pounds when we really buckled down and restricted his food. Now that that I think about it, a couple of months ago I thought, “Wow, we’re doing really great with this weight control thing for Jigsy. He’s looking svelte.” Maybe that was the start of it. It doesn’t really matter.

He went to Pismo Beach Vet Clinic on Monday morning, they did an x-ray and found lumpy kidneys and a mass on his lung. Had we caught this earlier it wouldn’t have changed the outcome. He had lymphoma, and it looks like the first sign of it was a mass in (or on) his lung, which makes the prognosis even worse. I brought him home Tuesday afternoon, not realizing how bad things really were. Poor kitty just couldn’t breathe. I kept him home last night and it was torturous to watch his labored, rapid, wheezing breath. He didn’t move except to get away from us-in the closet, under the bed. This morning he ended up in his favorite morning spot-on Sam’s bed, in what should’ve been, except for the foggy day, a patch of sunlight. He didn’t even have energy to get up and use his litter box. He didn’t eat or drink.

I knew what needed to be done. John knew. Even Abby didn’t want to watch him suffer anymore. Ben said, “You’re not going to kill my cat.” We talked about prognosis. We talked about suffering. We talked about how if Jigs was a human we would put a diaper on him and pump him full of morphine until it eased his breathing, which would put him to sleep, and he would sleep until he died. Too close to home. We talked about euthanasia. 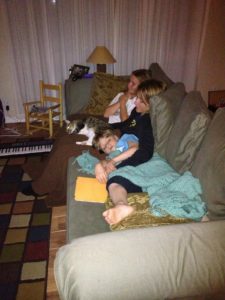 Ben and I brought him back to the vet this morning. I wanted Ben to talk to Dr. Joel, and I wanted Jigsy in an oxygen chamber while Ben came to terms with what was best for Jigsy. I wanted Jigsy to be comfortable while Ben wrestled with this impossible decision-not that it was really up to Ben. He’s not a grown-up. I wouldn’t do that to him, but I wanted Ben to be ready.

After a few hours at home and more talk of the life span of pets and our responsibilities to them, Ben said he was ready. I called the vet and made an appointment for 7 this evening. Less than an hour later Dr. Joel called to say Jigsy was in terrible distress, breathing as one does when one is dying. He asked for my permission to euthanize Jigsy right away. John was picking up Abby at school and I was home with Ben and Sam. I couldn’t leave. Even if I had rushed to the clinic, Jigsy would have waited 10 minutes for relief. I wouldn’t do that to him. I let him go. Ben and Abby were upset, but they understood and have forgiven me. John knew it was the right thing to do. Sam had been told that Jigsy was sick, and I delivered the worst news as gently as I could. I’m not sure he understands.